Long Island, New York metal/stoner/grunge trio Indus Valley Kings return with their sophomore album, Origin. Their self-titled debut wound up on my year-end list last year and this new record will undoubtedly achieve the same fate. The band has shown a great deal of evolution in their sound and lyric writing, even surpassing the expectations I had for this brilliant follow-up. 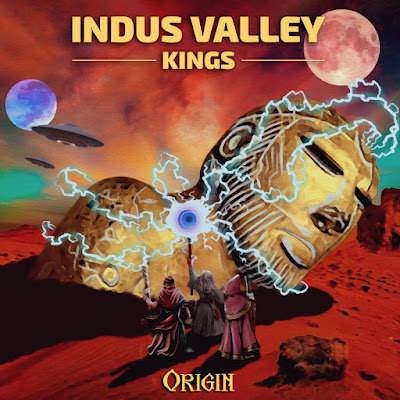 Origin pulls no punches and opens with “Clown”, a song about serial killer John Wayne Gacy referring to his alter-ego of Pogo the Clown. The intricate first single “…And the Dead Shall Rise” is an instant classic, featuring an awesome videoclip that pays homage to zombie movies—mainly Romero’s classic NOTLD. “A Cold Wind” is a slower-paced entrancing track that turns into an impressive jam session that really allows the band to showcase their talents. “Hell to Pay” shakes things up a bit and has bassist Jonathan Lesley Habers taking over vocal duties from singer/guitarist Billy Fridrich. It’s a catchy tune with a grungy vibe. The epic-length “Dark Side of the Sun”, running at nearly nine minutes, is certainly a highlight of the album and runner-up as one of my favorite songs from the band period. Mostly instrumental, it’s poetic and melodically fuzzy. “Mohenjo Daro” is a terrific instrumental track which refers to the archaeological site in the province of Sindh, Pakistan. The aptly-titled “Demon Beast” sees the return of Habers on vocals and reminded me of their excellent song “Devil” off of their first record. “Drowned” is a rallying song with cool tempo changes, filled with scorching guitars, a throbbing bassline and relentless percussion. “Sky King” is an infectious, kick-ass, near-instrumental that closes out the nine-song set leaving you to hum the song long after the record stops spinning. Definitely in my top 3 favorites on the album.

Origin puts the trio’s superb musicianship on full display. The band has grown, plays tighter than they did on their first effort, and deliver an all-around more polished and fine-tuned record. Origin shows absolutely zero sign of sophomore slump, instead it shines on all levels. As with their eponymous debut, Origin will be a permanent staple on my metal/doom/stoner playlist and it should undeniably make it to yours. Pick up this gem of an album and let the Kings take you on a trip you’ll want to retake over and over.

Harbinger of D.O.O.M.
Harbinger of D.O.O.M. is a music blog that writes articles, does interviews with bands and labels, and reviews albums of Doom, Heavy Psych, Heavy Rock, Heavy Metal, Old School Metal, NWOBHM, Stoner Rock, Occult Rock, Prog Rock, and other similar music genres, with a particular affinity for vintage, '70s & '80s-sounding bands. I don't review or write about Extreme, Black, or Death Metal. You can reach me at doomharbinger@outlook.com.