It's time for another conversation to shine the spotlight on a new and up-and-coming band. Today we shoot the breeze with Italian post-rock/stoner/progressive trio, IKITAN, consisting of Luca “Nash” Nasciuti on guitars, Frik Et on bass, and Enrico Meloni on drums and cowbell. 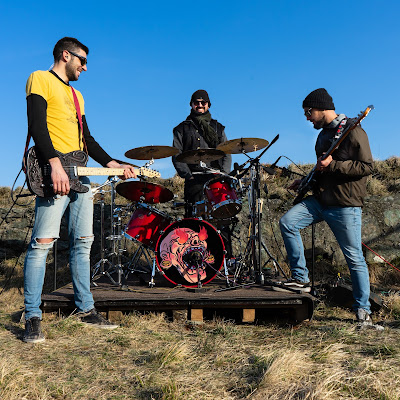 Harbinger of D.O.O.M.: Thank you for taking the time to chat with me. How are you guys doing? I’ve been curious about the name of the band: IKITAN. It’s a catchy, one-word name described on your Bandcamp page as the God of the sound of the stones (the angry figure seen on the Twenty-Twenty album’s artwork). Is it based on a mythological god or legend of some kind or is it something you invented? What’s the story behind it?

IKITAN: IKITAN was chosen by Luca, our guitarist, who was fascinated by its meaning, found on the Italian Wikipedia page of the “Aztec gods”. According to whoever wrote that page, IKITAN is the god of the sound of the stones. It fits perfectly the idea he and Frik Et had in mind for our music, and the moment we got together and started playing it made so much sense. There’s also a nice little pun there: stones and stoner, of course, as we love stoner rock. And also stoned, although we don’t smoke!

So we’ve been playing for months with this whole IKITAN concept in mind, we prepared the album cover (thanks Luca Marcenaro!) and everything… Some days before the actual release date, we found out this was not true! Or at least not verified. We even wrote to a university professor who is the go-to expert in pre-Colombian cultures, only to find out that IKITAN is nowhere to be found! The power of unverified Wikipedia sources… But who cares: we love the concept, it’s an inspiration for us, and we’ll stick to it! 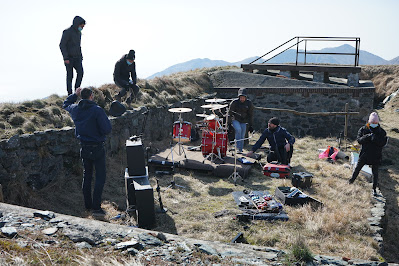 Harbinger of D.O.O.M.: The band was formed in 2019. Did you guys know each other beforehand? How did you come together?

IKITAN: IKITAN was born in September 2019 when Luca replied to an adv Enrico posted on a local musicians’ Facebook group, and the band started jamming one week after.

It must be noted that Luca and Frik Et have been friends for ages and have played together for over 10 years years and so they were looking for a new drummer for their new adventure.

Fun fact: the three of us played at a local gig back in 2010: Luca and Fri Et were already in the same band then, and Enrico, playing in another band, bought a demo from them (which he still proudly owns). 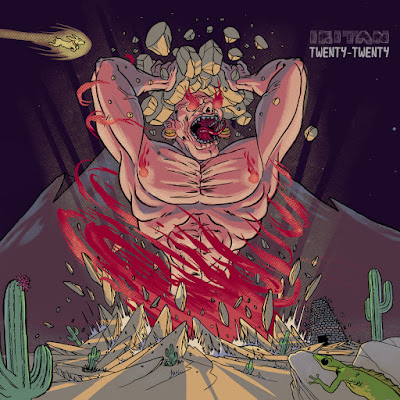 Harbinger of D.O.O.M.: Twenty-Twenty, the studio album and its live counterpart, is an intense, epic instrumental which flows so naturally, as if it were improvised in one take, yet is well constructed and elaborate. Was it your intention to perform a twenty minute instrumental from the get-go or did it evolve from a shorter piece at first? What was the process that led to the end result?

IKITAN: Our debut EP is titled “Twenty-Twenty” and it was released on 20th November 2020. This album was conceived as a longer song which includes different parts, or “Chapters”, as we like to call them, that are somehow linked among them. We can’t call it a “suite” because some of the formal elements are probably missing, but the idea somehow comes from the post-rock and prog worlds, which are a great influence for us.

By the end of spring of 2020, we had enough material to put together three different songs and, considering the overall situation caused by COVID, we said: “It’s our chance to put the word ‘end’ to this first part of the story of the band, nobody knows what’s gonna happen next, so we want to set this moment in stone” or, well… on a CD.

These three songs were somehow linked among them and at one point we also started thinking about just releasing the album as one only song and debut with a one-track EP. It was all very random and things clicked one after the other quite surprisingly.

Even though the ideas and riffs were all born during jam sessions, the end result is very much planned, meaning that we spent a few weeks working on these three songs only, making sure they had meaningful connections, the whole thing was interesting to listen to (you know, not so many repetitions of the same thing and the likes) and we could add a few extra special sounds and effects here and there.

Recording everything that we play in our rehearsal room certainly helps: we go back to what we’ve jammed the previous times, refining and listening to stuff constantly, and once we’re happy with something, we develop it fully until it becomes a song… or parts of a song LOL.

Eventually, the song lasts 20 minutes and 20 seconds. The album is titled “Twenty-Twenty”. It was released on Friday 20th November 2020. A lot of 20s!

To make our project even more special and our efforts truly worthwhile, we released the CD as a limited-edition digipack with a free poster and a sticker. The artwork was curated by Luca Marcenaro who did an awesome job.

Also, we’re very happy about the final result sound-wise: our guitarist Luca Nash is also a sound engineer and a music producer in his “real” life, the whole album (except for the drums, recorded at Mattia Cominotto’s Greenfog Studio in Genoa, one of the most renowned in Italy when it comes to rock music) was recorded at his private studio so we could do things at our pace and in a stress-free environment.

Harbinger of D.O.O.M.: You’re working on your first full-length album. Will it be an entirely instrumental album? What can we expect from you and when are you planning on unleashing it to the world?

IKITAN: Yes, the album will be instrumental but we don’t have a set date yet. It’s very likely that the new songs won’t be as gigantic as 20-minute “suites” anymore, we’re working towards something more direct and riffalicious but in pure IKITAN style. We still like not to stick to a particular genre and not setting any boundaries, so there will be some surprises.

The album will include something like 8-10 songs and these are bits and pieces of all the rehearsals (even bits that were left out of Twenty-Twenty) we’ve been recording since day 1, when we met to jam for the first time together.

Right now we’re still jamming and also developing some parts of older jams into full songs. We’ve been recording every single note we’ve improvised and now we’re letting the songs and improvisations guide us towards the next IKITAN album. Stay tuned! 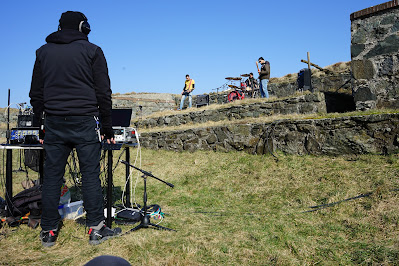 Harbinger of D.O.O.M.: Your majestic session at Forte Geremia last June was your first live gig as IKITAN. Have you guys played live elsewhere in other bands before that or as IKITAN since then?

Luca: Forte Geremia was indeed the first time we played live together outside the rehearsal room! Since we met, we had no opportunities to play live due to the Covid pandemic. Before IKITAN, Frik Et and I had played together in other bands but we played a slightly different style of music. We have played together since 2007 I guess.

Frik: As already said, Geremia, was the first gig we did as IKITAN. A challenging experience for the weather conditions (mainly due to strong wind and low temperatures!), but a very exciting one as well. I’ve known Luca for ages and as he said we’ve played together in the last years before forming IKITAN too.

Enrico: My first gig was at the age of 12, when with my cousin (it’s always an elder cousin’s fault!) and two friends went on stage between other bands and played two songs by Elio e Le Storie Tese without having ever rehearsed them before! We just knew them, went on stage, and nailed (?) them. This attitude is still with me, as improvisation and spontaneity are one of IKITAN’s trademarks.

After that, I’ve played with other metal, rock and funk bands both in Sardinia and in Genoa, as well as a short adventure with London-based hard rock band Dirty Mary, when we played venues such as The Big Red and The Alley Cat (both RIP). I love being on stage and I can’t wait to perform with IKITAN!

Harbinger of D.O.O.M.: Thank you for answering my questions and I wish IKITAN a long life. I’m eagerly looking forward to hearing your upcoming album!

Harbinger of D.O.O.M.
Harbinger of D.O.O.M. is a music blog that writes articles, does interviews with bands and labels, and reviews albums of Doom, Heavy Psych, Heavy Rock, Heavy Metal, Old School Metal, NWOBHM, Stoner Rock, Occult Rock, Prog Rock, and other similar music genres, with a particular affinity for vintage, '70s & '80s-sounding bands. I don't review or write about Extreme, Black, or Death Metal. You can reach me at doomharbinger@outlook.com.